At the end of the Saturday match against Queens Park Rangers (QPR), Tottenham manager, Mauricio Pochettino photographed the celebrating away fans and the match hero Harry Kane in order to celebrate the joy of staying in contention for Champions League qualification. Harry Kane delivered three points to Hotspurs by scoring his 15th and 16th Premier League goals on March 7, 2015 at the Loftus Road Stadium. It was a picture perfect moment for Pochettino after Kane’s double revived the Tottenham’s ambition to remain in the top six position. 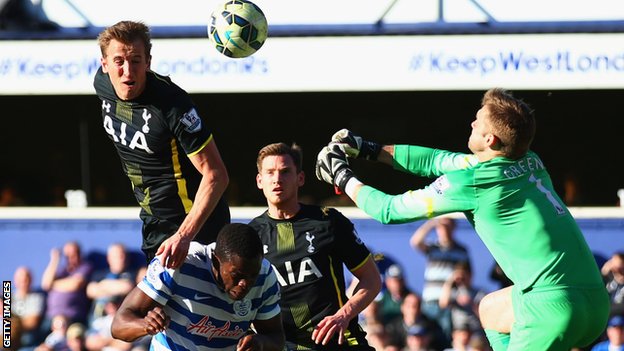 Kane has been nurtured by QPR's head coach when he was in the Tottenham youth team. His breakthrough performance left QPR in the bottom three of the League Table. Meanwhile, the 2-1 victory of Tottenham over QPR has moved Hotspurs above Southampton into sixth position. Tottenham is now three points off Manchester United in fourth.

Tottenham rivals played very well during the Saturday match. QPR’s Rio Ferdinand, who has been recently hired as a brand ambassador by the online casino operator CasinoFloor.com, tried to play Kane offside, but got his bearings wrong because Kane got on his shoulder and soon made a goal from a Ryan Mason pass. QPR’s Rob Green brilliantly saved some of the Kane’s attempting goals. Though QPR midfielder, Sandro, who has previously played for Tottenham, guided a fine sidefooted shot into the bottom corner, but his team lost the match to Hotspurs.

Match quality was in short supply in the first half, but the game gave equal chances to both sides. At some point of time, it seemed that Spurs had made things easy for QPR’s Charlie Austin, but soon they were able to take over the match when Kane made his second goal for the day.

An 18th defeat of the Premier League leaves QPR three points adrift off relegation safety, but Tottenham survived the pressure of remaining in the sixth position. At the end of the match, QPR’s head coach, Chris Ramsey stated that he was frustrated with the referee’s decision because he rejected two strong penalty appeals made by Rangers. On the other hand, Tottenham’s Pochettino stated that he was very pleased with his side performance against QPR.

In a post-match press conference, Pochettino said that Kane has the potential to improve more because he is in a very good form. Kane produced a bravura performance in front of watching England boss, Roy Hodgson, who might name his squad for the matches against Italy and Lithuania.