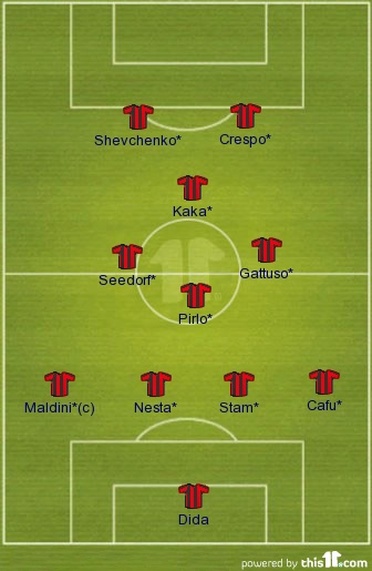 The AC Milan Line-up which dominated Europe from 2003 to 2007. Coached by Carlo Ancelotti mostly playing the traditional 4-4-2 system. The team won the 2003 UEFA Champions league, beating Juventus in the final, went all the way to the 2005 final in Istanbul, Turkey losing to Liverpool in a remarkable fashion where Liverpool pulled a dramatic comeback from being 3-0 down at half time to wining the match on penalties, that moment is known today as The Istanbul Miracle. However in 2007, two years later, Carlos Ancelotti boys got their revenge and beat Liverpool 2-1 to lift the 2007 UEFA Champions league trophy. The team faded when they failed to replace the seemingly tired old players.